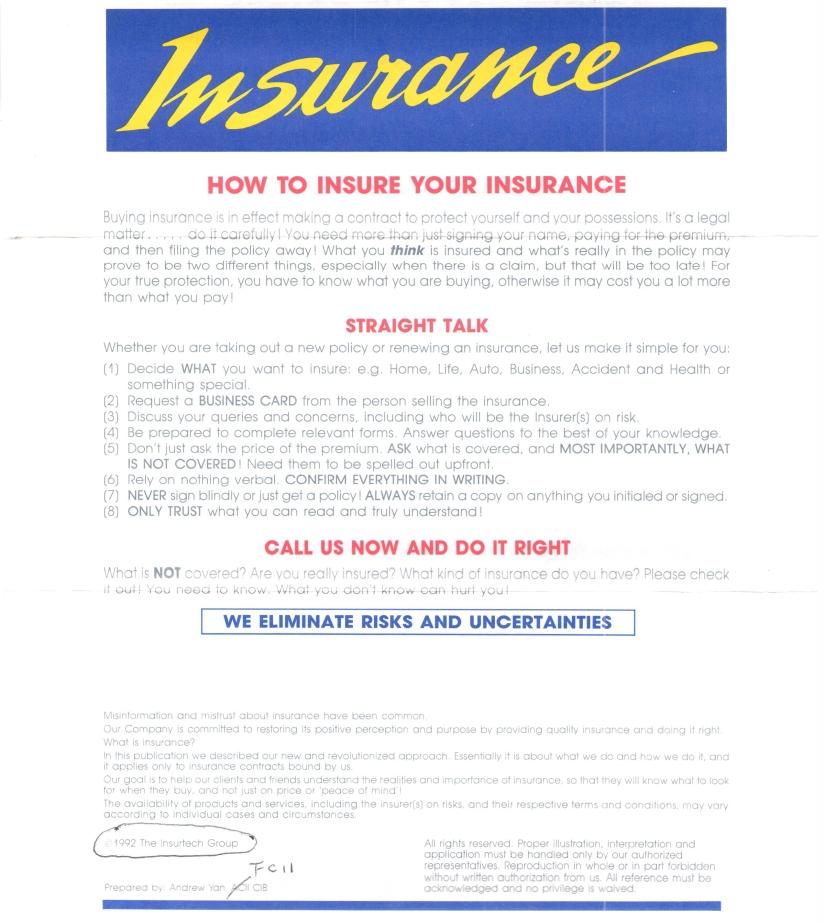 It was only meant to be a marketing flyer. Yet, it was misjudged as unconventional and contrarian! What followed was how the whole Insurance world works just unfolding before us since! Everyday! Suffered for Sanity?

At the end, as we will show you and prove to you, insurance business is a weird business! Essentially, not doing what is supposed to do is allowed, camouflaged, and justified as doing what is supposed to do! Support only those who fit in, give up and don't care, voluntarily or involuntarily, or simply just incapable of doing it! Just sell 'products'! But selling insurance that does not really provide insurance needed! For Caveat Emptor (Buyers Beware)? Making wrong become right, and as a corollary, making right become wrong also! In fact, selling insurance that can become or be made to become no insurance! Is that what insurance and insurance business all about?

Examples we saw and see are: Writing risks that should not be written, but declining risks that could be written. Paying claims that should not be paid, but denying claims that should be paid! Also, writing the same exact identical risk at different rates and prices! And many other similar self-justified unreasonings and manoeuvres! All just based on business volume and trading dollar considerations from different business sources, and "producers"! But really don't know and don't care where and how those sales and business volume came by originally! Is that what demanding minimum business volume all about? Special Programs? A Pen? All Trading Dollar schemes only! That also explains the severe and abnormal market polarization in the insurance world! Is it true insurance, or actually just involuntary self-insurance in a representative trading dollar game all based on respective business volumes? Who is supposed to be the insurer and true risk taker anyway?

Conflicts and treacheries are allowed and actually promoted and justified as something normal and proper to do! Conflicts will bring out the best answer? Where are the foundation principles of Utmost Good Faith and True Agreement of Minds? Simply follow the lead and the leader, faithfully and blindly! And also relationship of course! Driving and enforcing conformity! Not really about the risk and insurance business itself! What will happen to those who don't conform and follow? Ask us! Coherently also on the consumer side, those innocent who think insurance is an expense or something useless and extra will be subsidizing others, and don't know! Everything is camouflaged with justifications! Being independent and have authority? Actually, human nature and human weaknesses are being put into action and taken advantage of! What is the Sense of Purpose for insurance? Just make money, carry on, and simply don't care? Gone are Social Responsibility and Ethics also! Unwanted ramifications, consequences, and actually detriments will follow inevitably at the end, as an end result! Like what we see happening in the world nowadays, and everyday! Nobody cares!

Simply don't like to take risks! Don't want to take risks! Just put the blame on someone or something else! And don't even know how to take risks! Don't want to be responsible! And not allowed to take risk either! Just make it difficult, and so no need to do anything else! Guidelines? What for? Justifications and excuses only! How about paying claims? Same thing! And worse! Then, is that Insurance Business?! Insurance business is taking risks and paying claims! Therefore, in a way, to do business by actually driving business away! Doing insurance business without actually providing easy and straight insurance needed! To do Insurance business but don't want to insure and pay! Except as a marketing tool in the trading dollar business model, or only when no escape route is available! Practitioners and participants in the whole Insurance Industrial Organization are involved! Directly or indirectly, knowingly or unknowingly!

Unfortunately, the insurance industry does not want to change, and in fact cannot change, the way as it is now, even when the agent of change is already here and people also know they need to change! Instead, change is being played with and manipulated, so that no need to change, particularly their status quo! At the end, there will be no change anyway, because the whole industry and everybody are doing it the same, like usual and always, following each other, and everything will just end up staying the same as is! Totally at consumers' expense! How not to make it easy - especially in claims! Or perhaps so easy that something is missed and overlooked - at buying insurance and binding contract! Consumer interest? Customer care? Don't care! No wonder, Insurance Business always stays the same and has never improved a single bit over its long history!

As a result, insurance business is actually the quiet and hidden proximate cause for all the unreasonings and disturbing phenomena in this world, because insurance (and risks) touches on and affects everything we see and don't see in this world and in life, but wrongly! And people just learnt and copied subconsciously, and continuously, and do the same! In every field of the society and in every human endeavour! Yet doing it and not even knowing it! Or simply, just justifying it!

In fact, the more ignorance and inabilities there are, the more trades and professions there will be, and also the related resultant justifications! At the end, and in a way, "success" in business will be often by creating more ignorance and inabilities through driving and using perceptions, together with justifications so prepared and made ready at the same time! Do you see how things work and understand better now? It is such a grand Business Model initiated proximately by Insurance Business as we know today, directly or indirectly! And that's why we want to change insurance and disrupt it, to what it should be, by using Insurtech!

Like lawyering, laws are supposed to be about justice, but they have become more about justification instead! Pursuit of Justice costs a lot of money! Who can afford? Justice seekers or justification seekers? Just giving up on what is right and what was taught in schools? And don't care? Just do whatever! Even worse! Aren't they deemed to be sure and applicable? Or are they just negligible and meaningless? What is the purpose of Education? What is the purpose of Insurance? To dilute and disorientate Insurance Education? Teach only how to do it, but not what is supposed to do! No wonder! Is that the only way for survival and progress? More often it is shadenfreude in action, unknowingly! And many other other human weaknesses too! Nobody goes against the tide! Everybody is doing it and doing the same anyway! So just continue to be justified or self-justified! Let us imagine, what if lawyering is also involved and infested the same? In fact, what if all foundation industries and professions, together with insurance and lawyering, are all affected and infested the same!

Natural human weaknesses, particularly shadenfreude, should never even be allowed to exist in a pronounced and supposed to be honourable and ethical business of insurance, not to speak of allowing, applying and playing on them! Otherwise, it is pure malice, or simply being malicious! That's how people are proximately being manipulated, misled, and used in the first place! Unknowingly! All in the form of perceptions, being created and driven, and people being used also, as always! All the way! It is always the obvious that people don't see!

Time to change! For real! Because, fix Insurance Business will fix the World! Before everything implodes!